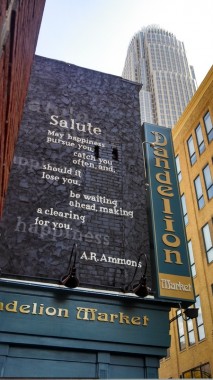 Amy Bagwell is a force for poetry in public spaces in Charlotte, NC. Spurred first by her love of poetry and her passion that it be out there for everyone to read, Amy, a talented poet and Central Piedmont Community College professor turned a seminar she taught during her final week in the Queens low-residency MFA program into a project that is bringing together literature and design students at CPCC and people who work in and care about the Charlotte community, Center City Partners among them.

The Wall Poems of Charlotte has so far placed an A. R. Ammons poem on Dandelion Market and Jon Pineda’s “Memory in the Shape of A Swimming Pool ” on Treloar House on 5th between Church and Tryon, this second project with wall space provided by the Levine family and photographic collaboration from the Inside Out Project. 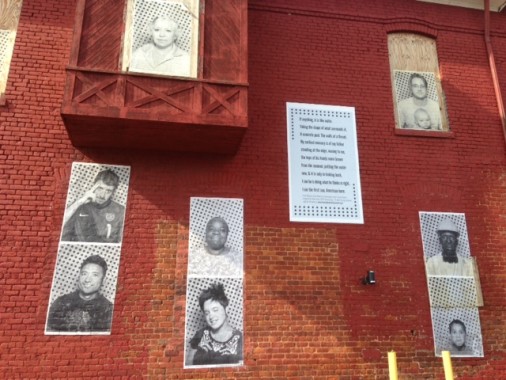 Amy and I spent a few hours together on a beautiful, clear Saturday in October talking about the Wall Poems project, visiting the sites where poems now grace once-blank city walls, reflecting on the multitude of connections among readers, passersby, and residents flowing from this project, and discussing possibilities and next steps. She brims with enthusiasm about the interdisciplinary collaboration going on at CPCC to produce the public poems, about the possibility of placing poems on the blank backs of newspaper vending boxes, about poems and a possible performance space on the corner adjacent to the old Carolina Theatre, about the inspiration of finding poetry in NYC buses and subways in years past and again now, the Poetry in Motion collaboration between the Poetry Society of America and New York’s MTA.

She will travel this December-January upcoming to visit Leiden’s Wall Poems and looks forward to April and Sensoria, CPCC’s annual celebration of the arts. Charlotte’s Creative Loafing has recently awarded the Wall Poems of Charlotte the honor of Best Public Art 2013, and The Charlotte Observer’s Courtney Devores drew attention to the exciting project in her October 25th feature article. Zipping around the city with Amy, there is time and energy only for our shared loves — poetry, people, words, art, and connection.

Jon Pineda’s poem, excerpted on the Treloar House wall appears here in full, and below it lines from “Grand Central” by Billy Collins, one of the poems in New York’s Poetry in Motion in subways in 2013.

Memory in the Shape of a Swimming Pool

Taking the shape of what surrounds it.
A concrete pool. The walls of a throat.
My earliest memory is of my father
standing at the edge, waving to me,
the tops of his hands more brown
from the summer, patting the water
now, & it is only in looking back,
I see he is doing what he thinks is right.
I am the first son, American-born.

It might even be a ritual, a father
taking his five year-old into his arms
while children from other
Navy families run along the deck.
Lifeguards blow whistles, stop them
dead in their tracks.

Lifting him over the water,
the father offers his son up to fear.

The boy understands the word mestizo. It means “half-breed,”
not full Filipino. It is the word they use at parties
& touch his hair. They speak to him in Tagalog. He knows

it is the language his father speaks on the phone, or under his breath
when he is angry. The boy answers his father’s questions in this language,
& some of the older Filipinos, those from an earlier generation, seem pleased.

It will mark his life. Years later, when the father leaves the family,
the boy forgets these words. They become, like the edge of the pool,
something he struggles to reach.

He crouches by the pool. He is saying, “Like this,” & spooling his fingers
together in the water. He is saying, his accent broken & unmistakably foreign,
not to give up. There are only so many words he uses, some in English & some
in Tagalog, & the boy, flailing his arms to stay afloat, understands none of them.

If anything, it is like learning to swim. Thrashing in the deep end,
the boy feels as if the water itself is a hand. He is sinking into its palm.
Though consumed with fear & the chill rising from the bottom,
he can see his father waving him toward the edge. As if he only needs
to make it there, & it will all be over.

Lift up your eyes from the moving hive.

and you will see time circling

under a vault of stars and know

just when and where you are.