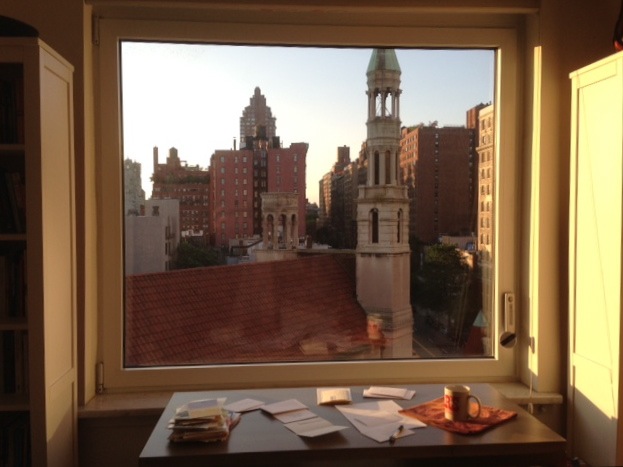 Responding on my mother’s behalf to the sympathy cards she’s received following my father’s death is a sweet task she and I share, even long-distance. I sit at the east-facing window in my apartment and read of the gratitude people have for my father’s life. At some point each day, I call my mother, and she asks me to read something I’ve written back to someone. I stack up the sympathy cards to which we’ve responded and post a parcel back to her each week. When I am with her again, we will answer more sitting at the small table in her cottage, and she will elaborate with stories and memories evoked by each card. In this way, through others’ words and ours written in response, she and I draw closer to each other and to the memory of my father, her husband of 63 years.

Just as my teaching in the Summer Writers Colony was beginning on Monday, some friends and fellow writers and some former students gathered at a friend’s apartment in the Village to remember significant relationships in our lives. Prose writers and poets read from their own work; some read from the work of others, including Seamus Heaney, Jane Hirshfield, Jack Gilbert. One who could not be there in person sent a poem by May Swenson. Through the lines and paragraphs acknowledging loss ran glimmers and threads of clarity, humor, and, gratitude, not facile appreciation, but akin to what Robert Bly sees in James Wright’s late poems, his “poetry of complex gratitude” — a third act of intelligence, forgiveness, even extravagance after Acts I and II of claritas and the dark (for more, see Bly’s introduction to James Wright’s Selected Poems).

In 1996, for my father’s 71st birthday, my two sons, then 11 and 14, bought and sent to Papa, as they called him, a book entitled Grandpa, Tell Me Your Memories. 365 pages, each with a writing prompt at the top. This was years before I began to write or teach writing and years before their grandfather’s dementia crept in. We asked him to fill in one a day and return it on his 72nd birthday. He completed two-thirds of the pages through the one for August 4th and some years later returned it to us. In the book he returned, typed on note cards glued onto the pages are reminders of conversations we had and insights into things we never discussed as well as candor and enthusiasm that went beyond many of our hurried lives’ conversations.

He held onto the beauty and the good, when he could, through tough times. His response to the prompt. Describe a place you liked to go to be alone:

I never particularly enjoyed being alone, but lying in the grass in our “back field,” as we called it, gave me some satisfaction by way of dreaming of the future and trying to “overcome” the present. I found much inspiration in good poetry.…In some vicarious ways my thinking during those adolescent years in Cameron enabled me to keep my senses with me in horrible combat during the war. I often wonder what would have been my lot in life had I not been a front-line combat soldier. It colored my entire life after the age of 20.

How much he loved life. In reply to the prompt, Tell about seeing something you thought was very beautiful, he wrote:

Many things: budding trees and bushes in the spring, a rainbow after the rain, a shiny new car, the different shades of green in the woods right after the new leaves had come out in the spring, a new little calf just learning to walk, a growing vegetable garden when all the weeds and grass had been cleaned out of its rows, blooming flowers in the small flower garden tended by my mother between our house and Miss Annie Borst’s, the moon shining across the lake at Lakeview as my father and I were locking up the boat in the twilight after an afternoon of fishing, etc., etc.

My father would, at times, slip in an almost melodic much obliged when thanking someone, an old rural Southern expression of thanks with obligation at its root, joy in being obligated, tied as by a ligament, to those who had shown kindness. The debt immense of endless gratitude, Milton wrote. The path between us direct, as at-hand as a to-do list. *See Tony Hoagland’s “The Word”.