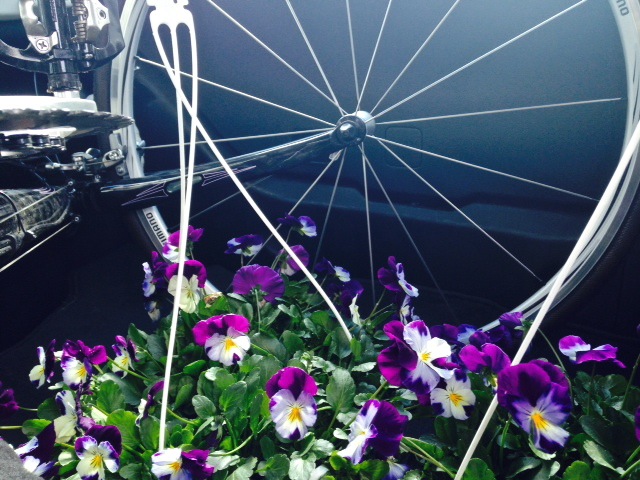 Typically around this time of year crocuses incite a gasp of delight, and they did again this year — just a few days ago in the backyard of the rented house to which I moved a few months ago and the next day, more robust ones, in the well-maintained grounds of Walnford Park during a stop on a bike ride. Writing that surprises, pleases and amazes can be every bit as immediate in the delivery of its impact while its construction or creation or process can be as unseen as the buried perennial bulb or the unsung strictures of an athlete’s daily discipline. 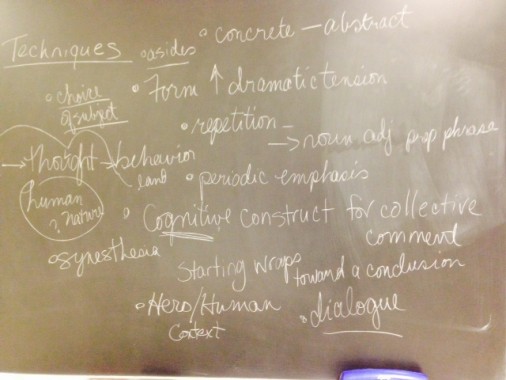 The talented writing students in my New School workshops—journalists, designers, photographers, therapists, entrepreneurs, bloggers, actors, filmmakers, lawyers, and full-time undergrads working multiple jobs — move easily in a polyphonic, multimedia, trans-genre world and in workshop work to create lyric, multi-form and hybrid essays. Alongside the writing, we discuss standards for critiquing and work toward clarifying our individual aesthetic takes, building better questions, we trust, from each crop of answers and then better answers and so on, leaving always openings, lacunae, vacuums, distrusting hyper-determinism. 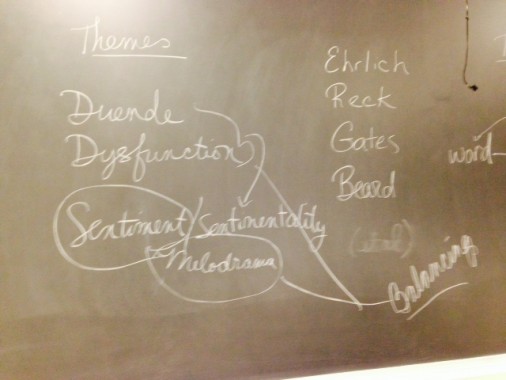 The blackboard notes in these photos are from the end of a class (I sometimes photograph the blackboard in order to write a summary of our discussion for one of the students; it’s always a richer text than my original outline) in which, because we had fallen a bit behind in our discussion of the assigned readings, we were tackling two weeks’ themes—duende and sentiment/sentimentality—in the same week. Unexpectedly, the two themes seemed aimed at one another, as if in conversation, challenging and bringing out new possibilities. One torquing, the other countervailing. Improvisational choreography that improved the quality of the content flowing in part from crowding the stage.

I recently came again on Peter Cooley’s “Staying Amazed,” in Spreading the Word: Editors on Poetry. I had read it some years back alongside Floyd Skloot’s essay “A Measure of Acceptance”. Peter Cooley’s piece looks at a poem by Floyd Skloot.

We came straight from school

crossing the island as winds

rose and fell. From half
a mile away the whitecapped
baywater smelled of fuel oil,
marsh grass and autumn
darkness. Gulls circled
a trawler nudging the dock.
We gathered in an alley
behind the old hospital
where our fathers recovered,
or declined, or lingered
behind the cold panes keeping
them from us. We were too young
and full of dangerous life
to be allowed inside. Stroke,
cancer of the lung, a broken
hip, severed arm, failing heart.
We named our fathers by what held
them there. Clot, stone, spine.
Taking turns to stand on one
another’s shoulders, we tapped
on windows as the sun set.
Fathers smiled within the folds
of their faces, waved, lay back
among the pillows. They turned
white before our eyes, became
empty spaces in our lives,
quiet behind glass in their
gleaming ground floor rooms.
—Floyd Skloot

“Unpretentious, unprepossessing, it works its way upon us with sonic and rhythmic claims yet leaves us to draw our own conclusions,” Cooley writes. He is specific about what in the poem fires him up, the sort of fire he looked for daily for decades in the submissions pile at the North American Review: (bullet point format is mine)

While not their explicit intent, Peter Cooley’s criteria suggest some standards that may be applied to prose lyric narratives that seek to move outward from the personal to a broader context, to temper dire earnestness, to explore the intriguing energy of threes, and to allow for the beauty of restraint.

Most passionately, he brings us to the most elusive — that for which he looked as the NAR‘s poetry editor. He writes that he was reading for the young man in him back then, newly arrived in New York from Detroit, who “would have read this poem several times through, especially if no one were watching. He stands here, in the narrow aisles of the dusty bookstore, frightened by the sophistication of the bored female cashier, in black turtleneck and smoking a black cigarette, he has passed on his way in…I edit for him because he still waits inside me for the next bulging envelope I tear open with my pocketknife. For the next time, unprepared, he is amazed.”

I like that Peter Cooley writes of the younger man in him. I like that Floyd Skloot submerges the one father in the many, the “I” in the “we”.

My older son, Ike, now 31, calls almost daily. “Mom, I have some news,” is his new standard opening line. He lives in a wonderful, well-run community for the developmentally disabled, now one of 12 in the nursing home section of that campus, the degenerative neurological disorder that has been part of his life for 16+ years still undiagnosed and still progressive. I try not to write about him much now, but a recent conversation with a young woman who had been a student of mine in 2000-2001 (a year of steep decline and collapsing dreams for Ike and for us, his family) and her new-to-me husband brought the humanity of our connection during that time back vividly.

His news is without fail sports news. He begins typically with the name of the sports star on his mind that day. “Brian McCann.” “Brook Lopez.” “Tyler Hansbrough.” Nothing more, just the name, which bounces the dialogue back to me. I have to come up with something to keep the conversation going, and if I want to steer it away from a request for a jersey or t-shirt, I have to keep up at least marginally with sports. He’s teaching me a little and keeping me open to a lot this way, and it’s a fun form of communication with him, more fun for sure than. “How are you doing? What did you eat today? Are you feeling any pain?”

Ike loves winners, and while we—his father, his brother and I—do rib him a fair amount about his status as a fair weather fan, we get it. Sports heroes make sense when we’re talking with Ike.

Most every day now, close to signing off our often brief phone conversations one or the other of us will say, “And you know, this is Derek Jeter’s last season.” And the other will make some small follow-up comment on that. “Playing Boston today, how do you think it will go?” “Who’s pitching?” It’s not a bad routine, this. 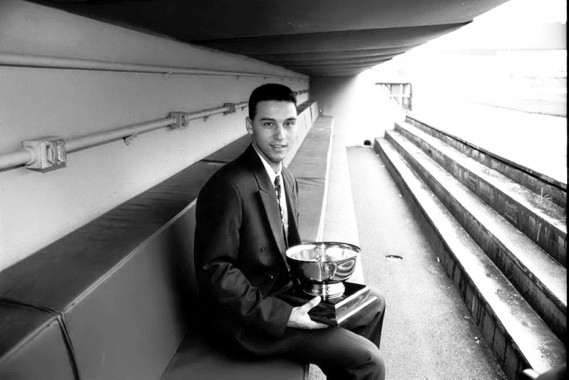 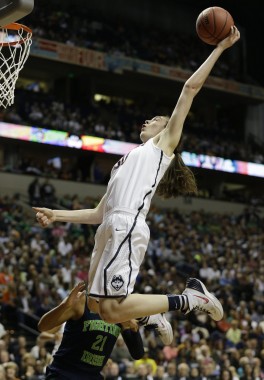 Staying amazed. Why not? When we can be, when people and work give us cause to be. And when a sweet hinge of convergences—crocuses, a little post-March madness, and Opening Day—encourage us to keep looking.