I had feared he would not remember. I hug him and feel immediately relaxed and strangely secure. 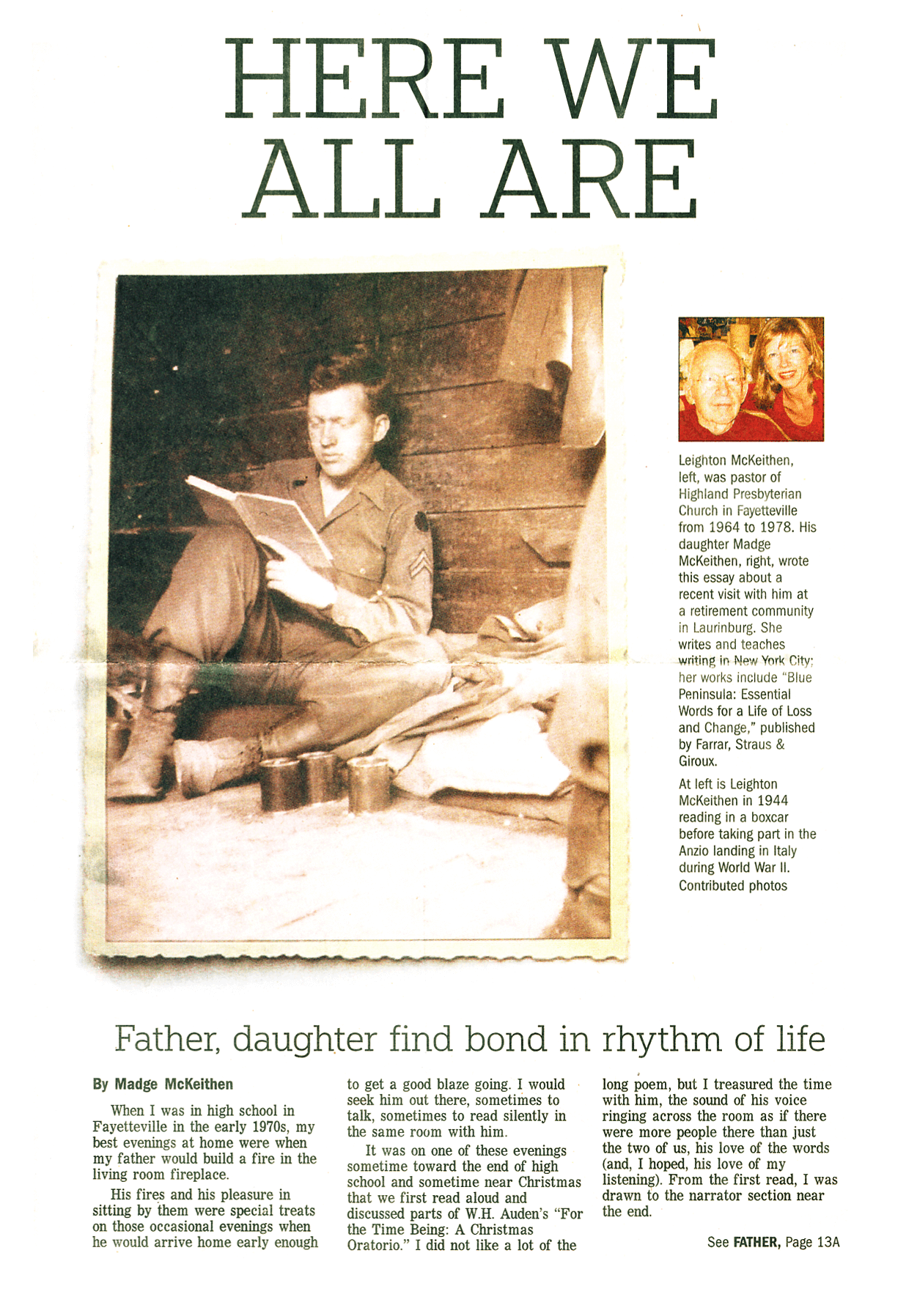 When I was in high school in Fayetteville in the early 1970s, my best evenings at home were when my father would build a fire in the living room fireplace.

His fires and his pleasure in sitting by them were special treats on those occasional evenings when he would arrive home early enough to get a good blaze going. I would seek him out there, sometimes to talk, sometimes to read silently in the same room with him.

It was on one of these evenings sometime toward the end of high school and sometime near Christmas that we first read aloud and discussed parts of W.H. Auden’s “For the Time Being: A Christmas Oratorio.” I did not like a lot of the long poem, but I treasured the time with him, the sound of his voice ringing across the room as if there were more people there than just the two of us, his love of the words (and, I hoped, his love of my listening). From the first read, I was drawn to the narrator section near the end.

For the innocent children who whispered so excitedly

Outside the locked door where they knew the presents to be

Grew up when it opened . In the meantime

There are bills to be paid, machines to keep in repair,

Irregular verbs to learn, the Time Being to redeem

From insignificance. The happy morning is over,

The night of agony still to come; the time is noon…

Last month, the Sunday after Christmas, I race to North Carolina to spend a few moments with my dad. It has been too many months since my last visit. We have not had a significant, sustained conversation for almost a year. He is slipping away with what the doctors in Chapel Hill and Pinehurst have identified as a form of dementia.

My desire to see him is elemental; I drive the two hours from Raleigh-Durham airport to the retirement community in Laurinburg in a silence I note from a distance.

The nurse I so admire there is in full view behind the nurse’s station as I push open the doors into the special care unit where my father has lived for 10 months. I am delighted to see her. She is a person I would have liked wherever I’d met her. I’ve thought often how good it is that she is at least a few days each week in my father’s universe.

Peggy points to her left. “He is waiting for you!” No one knew I was coming. There he is, his smile broad.

“Madgicake,” he says, calling me by the nickname he settled on once I got up the gumption to suggest that “Fat Lady,” though perhaps endearing to him and perhaps accurate, was a bit damaging to my eighth-grade psyche. “Madgicake.”

I had feared he would not remember. I hug him and feel immediately relaxed and strangely secure.

I sit across the cafe table from him in the dining area of the special care section of Scotia Village. We hold each other’s hands. He worries that mine are cold and that his are bruised. I tell him his hands look beautiful to me. He breaks into a soft song – he changes the words to a familiar tune, puts my name in. He says only good things to me, again and again.

I have wondered at times if there is something wrong with me that I care so much for my father, that I so want his pleasure and approval. Perhaps it is hard to sort out the ideals from the daily when you sit in a pew and hear him speak from his heart and his head every Sunday for years and years.

There have been times in my life when I wished I had had stronger powers of decision-making, had been less attuned to his, but those seem irrelevant now. His advice was never bad; what I have done with it is mine.

Last January after lunch at Subs-N-Cream, Etc., in this small town 40 miles from where I grew up – close to where he grew up and hunted wild turkeys with his father and sold asparagus with his mother before going to war – my father told me that he was ready to go, that he needed Mother to know that, that he would take her with him if he could.

There next to a salad bar, barrels of “too many flavors of ice cream to choose” and a consignment shop in the corner of the restaurant, he is offering a portion of love’s austere and lonely offices (Robert Hayden, “Those Winter Sundays”) for my mother, for me to keep handing her along the way.

That January lunch was followed not long after by my father’s solo, 200-mile road trip to the gravesite of an Army buddy in South Carolina. He must have made it there and was on his way back when he ran out of gas and pulled over on the shoulder of Interstate 85 and sat in the car until the highway patrol found him about 5:30 in the morning and brought him home. He had said he was going to Furman Smith’s grave to sit for 30 minutes and have a good cry.

L.J. Liebling says of veterans, “They mourn for their dead but also for war.” My father hurt for the families of his lost comrades; in recent years, he has talked often of the families of soldiers fighting now. It is frequently the Military section of The Fayetteville Observer that lies open on the table in front of him at Scotia Village in Laurinburg.

Since mid-February of last year, my father has lived in the dementia-care part of their retirement community. My mom inhabits the apartment that they shared for a little over a year after they moved there in late 2007. She visits him every day and every day takes him The Fayetteville Observer and, occasionally, with mixed feelings, leaves him to visit her children and grandchildren. She is, this Monday after Christmas, with my brother in Atlanta. I am visiting my father solo.

I open my laptop and the file with Auden’s lines. My father sits forward, curious, alert. “Do you remember reading this to me, Daddy?” He does not answer, but he smiles.

I begin to read, a little self-consciously, not wanting to disturb the two nurses and the few patients by the TV at the other end of the room. They are here with him every day, and they are here now during the holidays. They are endurance runners in his daily life and in that of my mom; I am merely a sporadic sprinter.

I read on. Whenever I pause for breath, he says, “Go on. Go on.” When I read the words “children who whispered so excitedly/Outside the locked door,” he exclaims, “Yes!” and then with more of a drift “…they have forgotten the words.”

I pause, thinking he might say more, thinking I will figure out what he means. “Please go on,” he says.

I do, and after the last words, I look over at him. He is looking at me, smiling a broad, peaceful smile (as much as I hesitate to use the word, I think his smile was beatific). He begins to tap a rhythm, not absently but with attention and focus. Is it the rhythm of the last two lines of Auden’s poem (That God’s Will will be done, That, in spite of her prayers, God will cheat no one, not even the world of its triumph)? It seems so, but I cannot be sure.

He continues to look directly into my eyes and at the same time to cock his head to the side to keep track of his tapping. He continues this for almost a minute. Then he stops. Still, the beatific smile. He has responded, not in words, but with a rhythm.

On Jan. 3, I fly to be with some of the Italian family who took my father in the fall of 1945 when he was 20 years old and combat-weary and had months to idle before he could ship home. My younger son and I will join in their celebration at the return home of one of their sons from fighting in Afghanistan.

I first went with my father and older brother to visit his Italian friends in December 1975. It was my father’s first trip back. I was honored to be with him and honored that he wanted me to go along. I slept in the room where he had slept 30 years earlier and threw open the curtains in the morning and looked out at the mountains and knew a little of something about what began to heal his heart way back then.

A man who collected my father’s stories over the past few years for a project that he is submitting to the National War Museum in Carlisle, Pa., told me that he does not know how my father made it out alive or how he kept standing up and speaking his heart and mind every Sunday for decades after.

At times, I wondered if my father felt guilty about having survived. I wondered if his life after the war would ever measure up to his life during the war. But as the years passed and he took me and my sons and my former husband and showed us his battlefields and his foxhole, as we stood and spoke with the small Italian woman who had been the laundress at the company headquarters north of Florence, as he shared these friends of his youth with us, I came to know he was weaving together a life of all he loved.

He took me to church with him once in the last few years. The topic was heaven. He had been asked to speak to the Sunday school class about afterlife. He said his views were more Unitarian than Presbyterian. He said he believes God makes it right with everyone.

He reached under the table and squeezed my hand. My father is an eternal optimist.

As I leave on Monday, he is again looking at The Fayetteville Observer. There is a headline with 2010 in it. “I am going to have some of 2010,” he says. I remind my father that I will see him again after I go visit his friends in Italy. I’m not sure he focuses or comprehends, but perhaps he does. He says only, “I love you so much.”

An essay on re-evaluating Auden through the lense of her father's life, "Here We All Are" appeared in the January 10, 2010 edition of The Fayetteville Observer.